Here at ChesterBoat we host all sorts of events, from christenings to birthday parties to weddings. Yesterday the Mark Twain played host to one of our more unique events – the Lord Mayor’s Inspection of the Dee.

As Lord Mayor of Chester, Councillor Mark Williams is also Admiral of the Dee, a title dating back to the 14th Century when Chester was an important port. The annual Inspection of the Dee is an opportunity for the Admiral to address any issues on the river. Although largely ceremonial, the Lord Mayor is joined by staff from Cheshire West and Chester Council who do undertake regular checks on the river.

This year the Lord Mayor was also joined on the Mark Twain by crew from the HMS Albion, which is docked in Liverpool for a few days.

On Sunday the ship’s company of the HMS Albion exercised their ‘Freedom of the City of Chester’ by parading through the streets into Town Hall Square to be inspected by their sponsor Princess Anne. The Princess Royal then unveiled a plaque to celebrate the 150th birthday of the Town Hall.

Yesterday we welcomed some of them – including Commanding Officer Peter Laughton – aboard the Mark Twain for the Lord Mayor’s inspection, where they enjoyed a cruise up to Eccleston in rather wet conditions. But we’re sure they’re used to much worse at sea!

Our Paul felt a bit under pressure skippering the Mark Twain in the highest tide of the year while being watched by the experts – but they complimented his skilful boat handling in difficult river conditions. 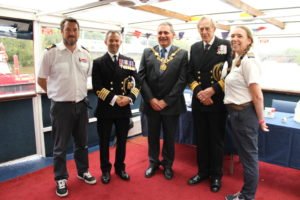 Email:
enquiries@chesterboat.co.uk
Social
Receive our latest news and offers
We use cookies to ensure that we give you the best experience on our website. Do you accept the use of cookies?I acceptI do notRead more